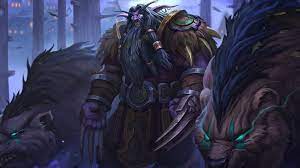 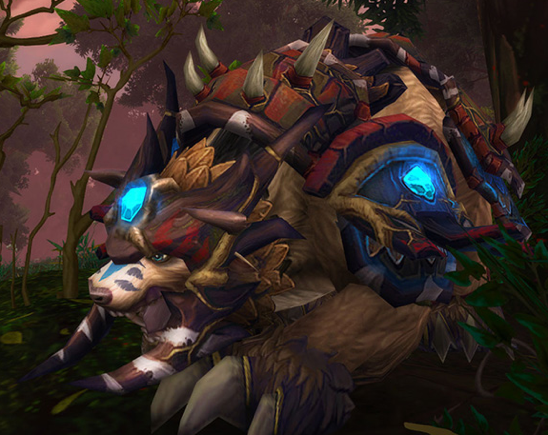 Until you reach level 10, you’ll be a normal druid with the basic abilities that every beginner gets. However, once you reach the level, you can pick your own specialization; Feral, Balanced, Guardian or Restoration Druid. They’re all great specs, but Restoration isn’t required unless you want to level up only through healing dungeons. A plus point is that you can swap among your specialization by opening the Spec & Talent tab, or you can press the N shortcut key. Let’s look further into what these specializations have to offer.

As a beginner to the Druid class, even though every specialization has its own strengths and weaknesses, it’s best that you choose Feral as your Druid Levelling Spec. The reason is that Feral has the necessary tools required to deal an insane amount of damage, and the bleed effects last longer. Another benefit is that your movement speed is increased by default in the Cat Form, allowing you to stay flexible as compared to the other specializations.

If you want to play a Ranged class, then the suggestion would lie towards Balance Spec. The gameplay might be more complicated than Feral because of the mechanics used for the Astral Power and Eclipse Ability. However, it deals a great amount of damage while using Ranged, and while being in the Moonkin Form, you get innate benefits by being one of the most durable casters out there. 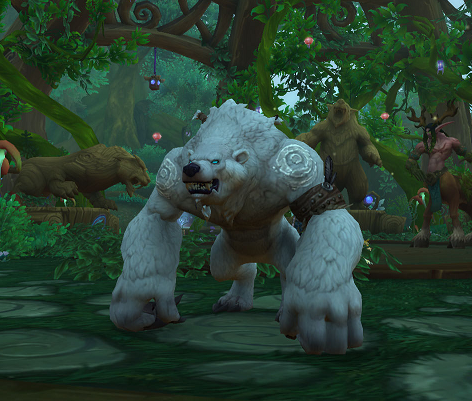 You can also try Guardian if you don’t want to level up as a straight DPS Spec. Even though it’s a Druid tanking specialization, you can deal a good amount of damage through abilities, such as Thrash and Maul, along with the surviving ability to withstand multiple mob punishments. Being a Tank spec, you can use Guardian to swiftly get across dungeons.

Finally, there’s Restoration, which isn’t really recommended for levelling, but with the abilities; Wrath and Moonfire, they can do genuine damage upon the enemies. As compared to the above three specs, Restoration will not be able to withstand serious damages or survive punishments from multiple mobs. However, they can benefit from their quick healing queues in dungeons.

Choosing a race can be a tough job because whatever you go with, it’ll define your character’s appearance throughout the game, and it is also expensive to switch the traits. Druids have two options available to them; Default Races, which are available to you as soon as you begin the gameplay, and Allied Races, which are locked and requires certain requirements to unlock them. Every race has different abilities and spells, but none of them offers an immediate advantage to the players. So, the best suggestion would be to create your Druid in a manner that suits you best.

Feral Druid Talents: Predator, Sabretooth, and Lunar Inspiration at level 15. Tiger Dash, Wild Charge, and Renewal at level 25. Restoration Affinity, Balance Affinity, and Guardian Affinity at level 30. Heart of the Wild, Mighty Bash, and Mass Entanglement at level 35. Soul of the Forest, Savage Roar, and Incarnation – King of the Jungle at level 40. Primal Wrath, Scent of Blood, and Brutal Slash at level 45. Feral Frenzy, Moment of Clarity, and Bloodtalons at level 50. 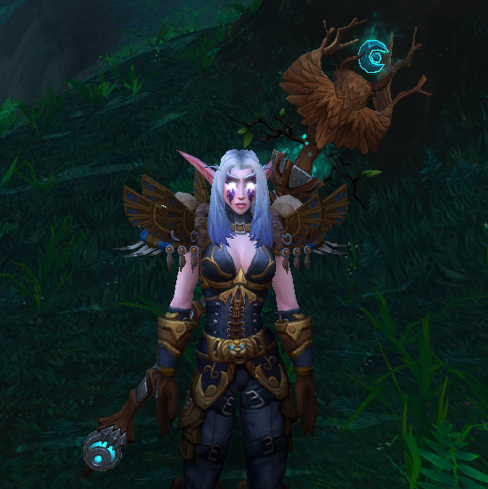 Balance Druid Talents: Force of Nature, Nature’s Balance, and Warrior of Elune at level 15. Wild Charge, Tiger Dash, and Renewal at level 25. Restoration Affinity, Balance Affinity, and Guardian Affinity at level 30. Heart of the Wild, Mighty Bash, and Mass Entanglement at level 35. Soul of the Forest, Starlord, and Incarnation – Chosen of Elune at level 40. Twin Moons, Stellar Drift, and Stellar Flare at level 45. Fury of Elune, Solstice, and New Moon at level 50.

Guardian Druid Talents: Brambles, Blood Frenzy, and Bristling Fur at level 15. Wild Charge, Tiger Dash, and Renewal at level 25. Restoration Affinity, Feral Affinity, and Balance Affinity at level 30. Heart of the Wild, Mighty Bash, and Mass Entanglement at level 35. Galactic Guardian, Incarnation – Guardian of Ursoc, and Soul of the Forest at level 40. Survival of the Fittest, Earthwarden, and Guardian of Elune at level 45. Rend and Tear, Lunar Beam and Pulverize at level 50. 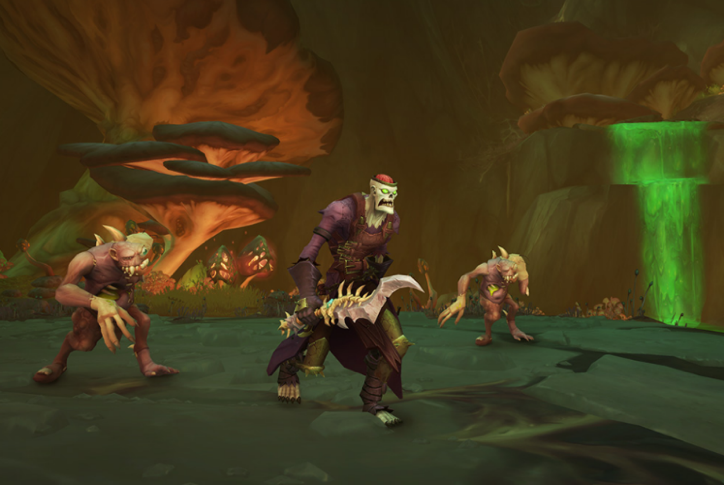 Start the fights with the ability to prowl, because using Shred would benefit more at higher levels. For recurring damage, you can use Rake and continue to generate Combo Points, so that you can make use of Rip or Ferocious Bit to inflect a great deal of damage.

Elite Mobs: The usual strategy must be used for the elite mobs, but if they’re stunnable, then you can use your Combo Points on Maim to buy time. Make sure that you use cooldowns, such as Berserk and Tiger’s Fury to inflict more damage to the mobs. You can always run away if things get hard by using the Travel Form

Lots of Small Mobs: Normally the best bet was to apply recurring damage effects to the mobs through the ability Thrash, and then bring them down one by one. However, that is no longer recommended, because once you learn Swipe, it’ll get a lot easier with them. You can simply use the ability to generate combo points and use the finishers to end it.

Dungeons: Be a support for your team and interrupt as many mobs as possible through the ability Skull Bash and Maim. You may have to switch to the Bear Form if the main tank dies, but things will still run smoothly.

You will have to start off by firing any one of the two abilities: Wrath or Starfire, so that you can get your Eclipse chain moving. Moving on, you can start to apply Moonfire and Sunfire for recurring damages. Finally, you can make use of Starsurge when you have enough Astral Power, but if you’re close to starting an Eclipse, then wait to empower the current one.

Elite Mobs: You’ll have to use the usual strategy for elite mobs, but if they’re root-able, then make use of Entangling Roots to keep your distance. Also, don’t forget to use DPS cooldowns like Celestial Alignment (if you have them). If times get tough, you can go Travel Form and run from the ongoing fight.

Lots of Small Mobs: Until you learn the ability Starfall, small mobs aren’t really recommended. Once you do, keep using Moonfire and Sunfire for Astral Power, and then spend it on Starfall.

Dungeons: Make sure that you help your team out by using Solar Beam to interrupt the spell casts. You may eventually have to turn into the Bear Form to tank if your main tank ends up dying. However, it won’t be that tough.

To start off, you’ll have to use Moonfire to pull the mobs towards you, and then during cooldowns use Mangle to generate rage. While that happens, use Thrash to apply a bleeding effect to the mobs, and once you have enough rage stored, you can use the ability Maul or Ironfur to deal a good amount of damage.

Elite Mobs: There are multiple ways that you can lower the damage done upon yourself; you can use Rage in a defensive manner with Ironfur, you can use Frenzied Regeneration to heal yourself, and you can use offensive cooldowns, such as Berserk to deal a good amount of damage. If things go south, you always have the option to turn the tables around by using Barskin or Survival Instincts. Other than that, you can go to Travel Form to escape the fight.

Lots of Small Mobs: A plus point in Guardian Druids is that they have good AoE at an early stage, which goes pretty well with Thrash. So, apart from the addition of Thrash, there’s nothing else that needs to be changed in the rotation. However, once you learn Swipe, you may want to include that too because Guardian Druids are good at handling multiples mobs at one time.

Dungeons: During dungeons, you’ll function to keep the mobs away from your party members by using threats on them, and then Growl to attract the mobs towards you. If the controlling of mobs gets out of hand, you can buy a few seconds through the ability of Incapacitating Roar. Also, make sure that your healer isn’t struggling so much to keep everyone alive, because you, as a tank play a vital role here in positioning everyone. 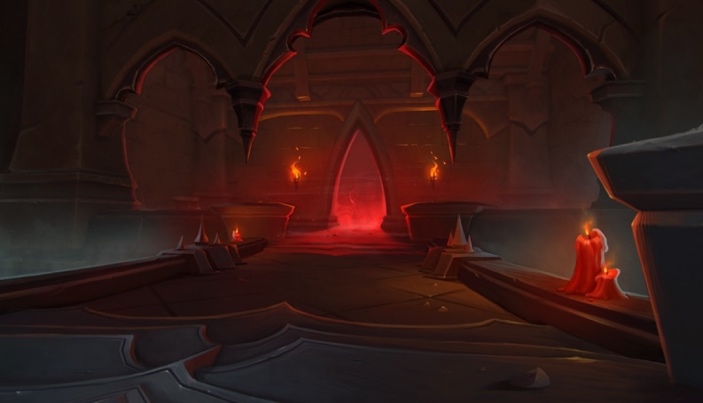 Dungeons: Firstly, make sure that you use Rejuvenation on the targets that need slight healing, and Regrowth on the targets that need more attention. It is suggested that you leave Rejuvenation on everyone in a recurring manner so that you can effectively remove it when burst healing abilities, such as Swiftmend is required. In terms of tanks, the ability Lifebloom plays a significant role at all times. If the entire group seems to be in danger, you can make use of the abilities; Wild Growth and set Efflorescence to heal everyone in one go. Similarly, your role consists of helping the DPS with Wrath, Sunfire and Moonfire, but you aren’t required to DPS yourself as a healer. However, you can do it if there’s no heavy damage taking place, and then switch back when the part requires its healer.

There are numerous profession choices to choose from, but Skinning and Leatherworking work quite well, as it allows you to extract the skins from dead mobs and then craft them into leather gear. Leatherworking is essential for Druids at a higher level because it enables you to craft the base pieces for Level 60 Legendary Armour.

Another recommended set of professions would be Herbalism and Alchemy, where you can collect herbs and turn them into potions that allow you to heal yourself or inflict additional damage upon the enemies. Also, if you’re looking for a profession to make money, then go for Mining, Herbalism, or Enchanting.