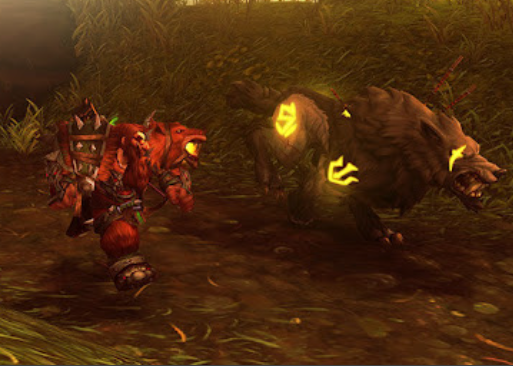 Before we begin, let’s have a look at some benefitting tips for beginners. Well, first off, complete the Hunter quest once you reach level 10 so that you can learn how to summon pets, as they play a vital role in advancing. Right before you leave town to begin your journey, make sure that you’re stocked up on arrows or bullets, along with the appropriate food to feed your hungry pet, because the happier it is, the more damage it’ll deal during battles. Have the habit of saving up gold, so that you can purchase the amount as soon as you reach level 40 or 60. Finally, once you’re around level 50 or above, start searching for mobs that drop Pre-Raid BIS (Best-in-slot) gears.

In hunting, you have the options to choose from three available builds; Beast Mastery, which is the best option throughout the game, as you won’t have to rely upon upgrades to increase your damage. Another plus point is that your pet will take on most of the damage coming your way, and as you climb up the Beat Mastery Talent Tree, your pet will become strong enough to face and defeat enemies alone. Marksmanship is of extreme significance while grinding dungeons for levels because most of your damage will be from attacks like Multi-Short and Trueshot Aura, which are both powerful buffs for hunters. I think Marksmanship would be the best option if you’re grinding levels in a dungeon with a reliable group. Finally, there’s Survival, which is worse as compared to the other two builds, but you gain utility advantages in low-level PVP (Player Vs Player).

Pets basically do all the heavy lifting work, while you level up your character. However, choosing the right pet is important, because their abilities and potential to upgrade are the two important factors that you should look out for. Players who are training their Hunter, often go for a Cat, because of its high attack speed and capacity to deal more damage as compared to the other pets. It has the ability to use Claw and Bite, which are primarily used by players during a battle and are known to be highly beneficial. On the other hand, there’s Wind Serpent, which can be obtained for the first time, outside the Wailing Cavers dungeon. They’re famous for their 'Lightning Breath' ability, which is quite strong and completely ignores any armour defences for a direct hit

Best Hunter Professions for Levelling Up

There are a lot of professions to choose from, but when it comes to Hunter, there are a few professions like Skinning and Leatherworking that go quite well with it. Leatherworking can basically help craft various items that are known to be beneficial while levelling, and it can also help Hunters obtain some of the best Pre-Raid gears, such as Devilsaur Leggings and Gauntlets. The leather used for Leatherworking recipes can easily be obtained from the Skinning profession. However, that depends on how much time you’re willing to spend on skinning the mobs that you’ve defeated. You can also go with a different pair, along with Skinning, such as Herbalism or Mining.

Every class has their own unique quests that can be completed by players. These quests help obtain experience and various unique rewards. There aren’t many quests for the Hunter class, but at level 10 your trainer will direct you towards a series of short quests, that include tasks like Tame Beast, Feed Pet and Revive Pet. Moving on towards the class quests, they won’t be available to you, until you reach level 50. However, when you do reach, you’ll have access to longer quests within The Temple of Atal’Hakkar. There’s a positive side though; you can get powerful rewards, such as Devilsaur Tooth, Devilsaur Eye, or Hunting Spear.